A lot of people purchase used gear without a care in the world about where it came from. If it works and was a good deal, then everything is fine, right? Gear theft will remain a huge problem if we don’t all start regularly spreading good buying habits. By having good situational awareness and a high willingness to walk away from suspicious deals and sellers, thieves will have less and less incentive to target photographers and videographers because they can’t move the gear as easily. More than that, ignoring your gut instincts about a “good deal” from a shady seller could land you in legal trouble. Read on to learn more about the risks of buying used.

Can I Get in Trouble for Buying Used Camera Gear?

Most of the marked-as-stolen gear we see people try to register on Lenstag are from people who are not thieves – they are simply people who bought something used from somebody they didn’t know and they thought they made a safe used purchase. You may have heard that it’s illegal to be in possession of stolen goods. The law is different for various states and around the world. Typically, the buyer must know that the item was stolen to be held responsible. Deals that are “too good to be true” can sometimes put you at risk since it might be interpreted that you “knowingly” purchased something stolen. If it can be proved that there was a “reasonable expectation” to suspect that what you’re buying is stolen, you could find yourself in trouble. Stay away from this “should have known” situation by distancing yourself from suspiciously good deals, as tempting as they are. Most gear has a pretty consistent used market value and folks who are way underselling should be met with suspicion, not glee.

Most states have laws in place for pawn shops and thrifts stores that require some amount of due diligence when taking in used gear, including some personal information about the seller. Buy/Sell shops are increasingly cooperating with local law enforcement and many pawn shops have theft databases of their own to compare goods against. A lot of folks fear pawn shops but they actually can be a much safer way to buy gear than from strangers online. It’s still always a good idea to check the serial number yourself, however.

I Bought Stolen Gear on Accident, Now What?

If you think you bought stolen gear (or we reach out to you because the serial for your used gear showed up in our Stolen Gear database) then what should you do? First thing would be to contact the police. If your serial was found on Lenstag’s Stolen Gear list (give it time to load), we can let those same police know about the match in our database so that the gear can be reunited with its owner (if the owner already received a claim from their insurance, then the gear may actually belong to the insurance company).

Do not try and return the gear to its rightful owner directly. You don’t want to risk being slapped with “handling stolen goods”. So it is best to work with the police directly and Lenstag will cooperate with them also, wherever needed. Getting a refund from the seller can obviously be difficult but if they are arrested then sometimes restitution will be part of their sentencing. If you purchased something online, you can try and do a chargeback.

Lenstag offers a couple of ways to prevent being in a bad buying situation. Ask the seller for the item’s serial number (a picture of it is best, rather than just accepting any number at their word) and text that number to +1-415-749-9808 to see if it’s marked as stolen in Lenstag’s database. 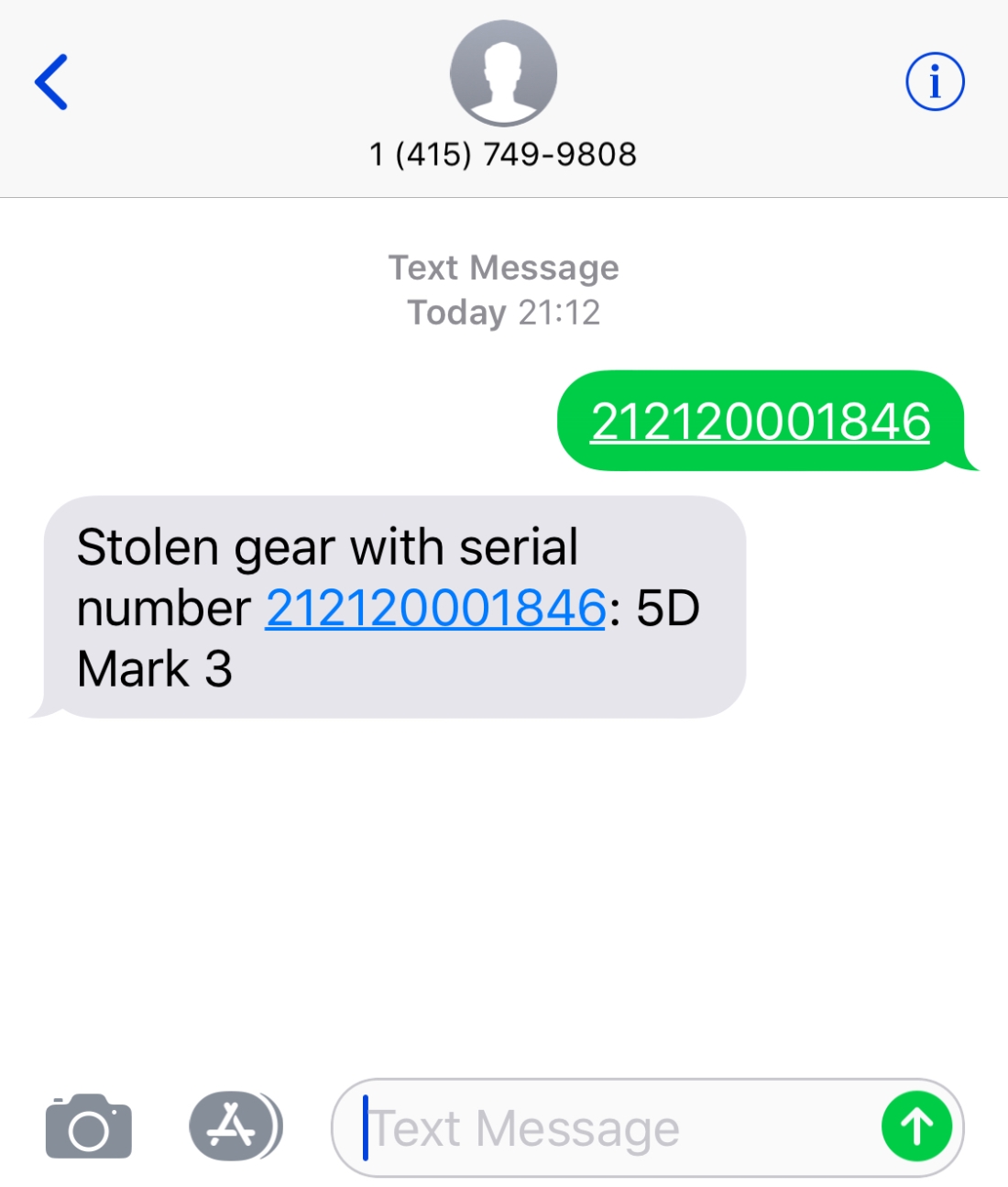 There are little “tells” that the seller might not be genuine. Most shooters are very fond of their gear and have a story about why they have to sell it. Don’t be afraid to ask the seller questions that might seem a little personal. “What do you like to shoot? Do you have a website? Why are you getting rid of this item?” For cameras, a shooter should know how to find the shutter count, or “actuations” (are you a shooter who doesn’t know how to do this? Check out this handy guide on finding your camera’s shutter mileage). For lenses, a shooter should have some idea of what back and front focusing is, how to test for that, and whether or not the lens exhibits any of that behavior (don’t know what that is? Here’s an intro to lens calibration and focus checks).

There are so many more “tells” that we are certain shooters out there have learned over the years of interacting with fishy sellers. We implore you to share your knowledge in the comments to help improve the safety and situational awareness of others.

We recommend purchasing used gear from established online retailers (like B&H and KEH) that have a robust refurbished inventory and trusted used gear section. They have to record everything about their used gear and who they purchased it from. The chances of receiving stolen equipment from them is extremely low but, even still, always ask for the serial number to check against Lenstag before buying. Camera rental shops can also be a good option because they typically buy their inventory direct from the manufacturer or from trusted retailers and so they are only selling what they’ve owned the entire time – plus all the major ones already use Lenstag. These shops might not always have as good of deals as Craiglist, but peace of mind is priceless.

Register once, protect forever. Add your cameras, lenses and anything else to Lenstag and get global protection plus so much more. Protect your camera gear and images for free and join tens of thousands of photographers around the world in the fight against theft. View all posts by Lenstag